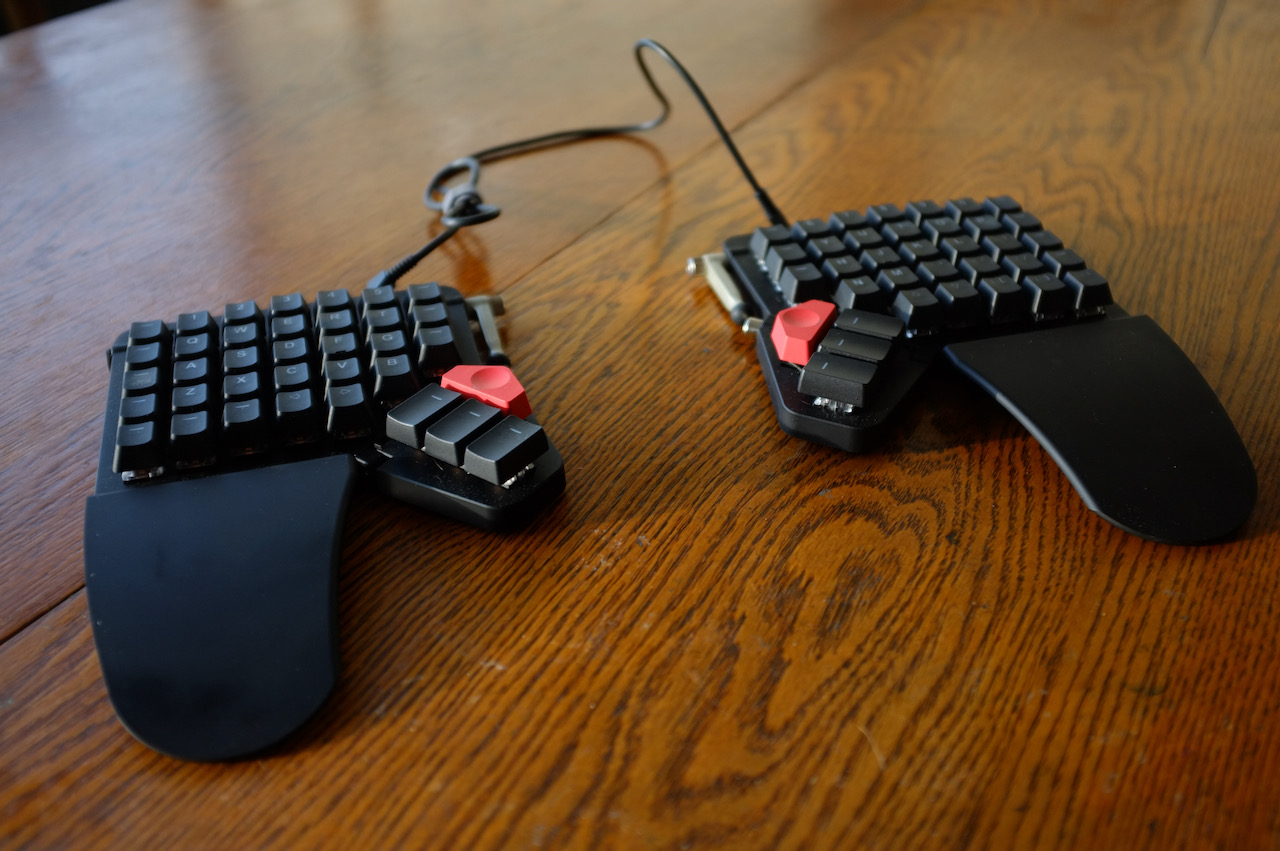 I would not have purchased this machine with my own money. No one needs this nice of a keyboard. But it’s a damn fine ergonomic, ortholinear, mechanical keyboard.

As part of joining Shopify this fall, I was able to expense some home-office items. As I was already mostly setup in my (tiny) standing-desk-home-office, I took it as an opportunity to splurge on something I saw as an unnecessary investment - a really nice mechanical keyboard. I bought (and waited for) an Ergodox Moonlander keyboard.

I have never owned a mechanical keyboard. I haven’t typed on one since middle school typing classes in the computer lab. I purchase a Microsoft Sculpt keyboard earlier this year and was impressed by how much my hands relaxed and appreciated the split layout. There was definitely a steep learning curve, but I found myself typing faster and longer without interruption after a mere month of training.

So, I figured I could do it again - learn a vastly different method of computer input for physical and mental gain.

I’m only in week three of learning this new keyboard, but I finally feel like I’m catching up to this layout. The ortholinear orientation is very difficult for me to learn, mostly because I learned to use the wrong fingers for certain keys in my younger years (looking at you p, x, o, and q). Besides that, my struggles have mostly been around fully realizing the potential of an unlocked, configurable keyboard at my fingertips.

Modify one key at a time. After being too eager to modify the layout with the (very nicely featured) editing system, I learned that you should give any layout at least a day’s worth of handache before you go modifying it and throwing away your new muscle memory. If, after a day, I still am not hitting the right key at the right time, I’ll then change its position. This means my layout evolves pretty slowly, but I know that when I make a change, it will be a step in the right direction. (The manufacturer recently released a heatmap visualizer for your layouts that I’m excited to try to handle this problem.) 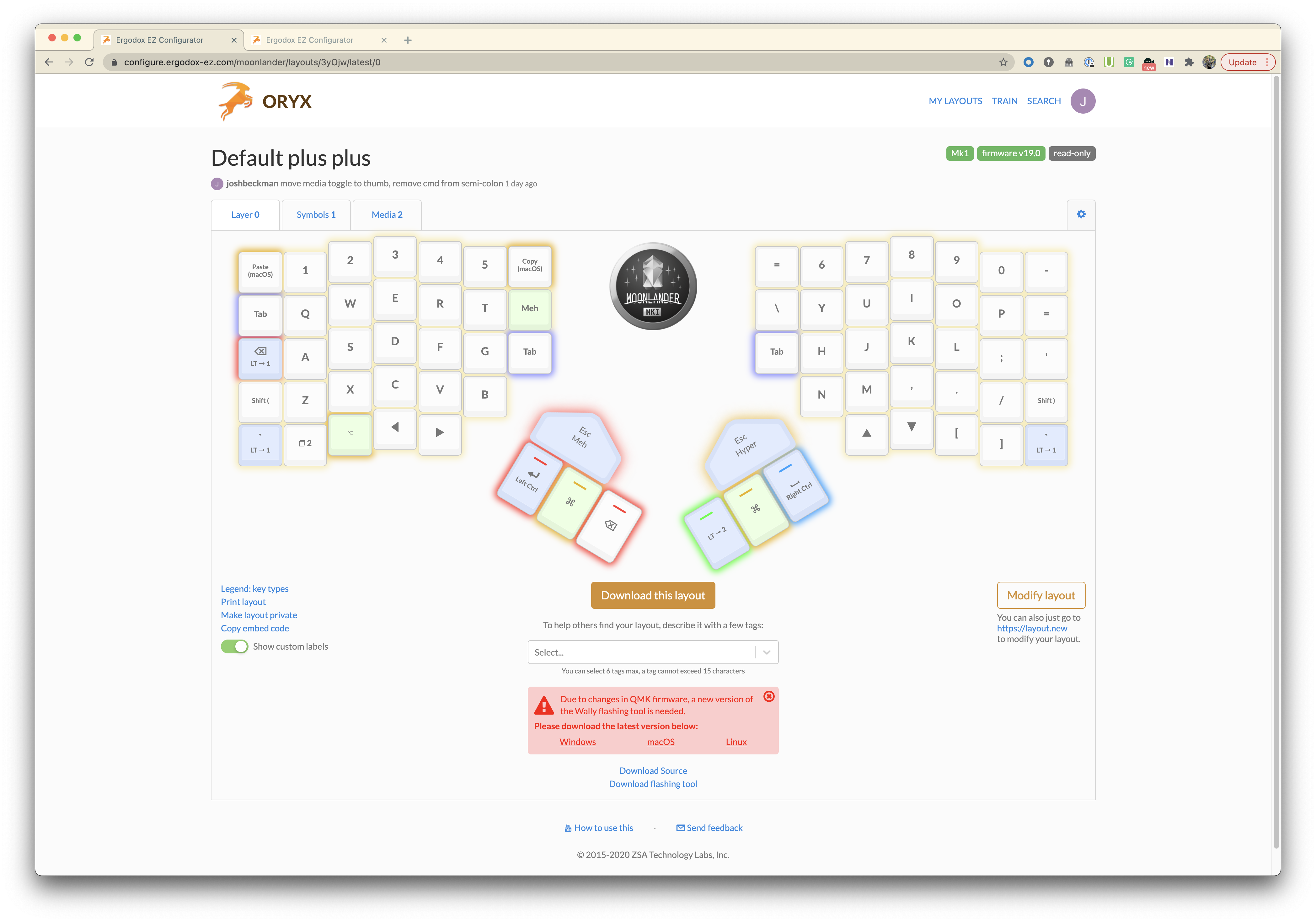 This is an opportunity to re-learn the basics. This was a real turning point in me realizing that I learned to type with the wrong fingers early on. I think the only way to handle this is to embrace it.

But, every time you hit the wrong key five times in a row, change its position. For example, I was experimenting with having my Enter key next to my pinky. But I found myself hitting it way too frequently during excited responses in chat. I believe that there’s a line between modifying yourself and embracing this keyboard’s ability to adapt to you. Ditto for whenever you forget the position of a key five times in a row. Move it and move on.

Embrace your thumbs as valuable fingers. I never realized how little your thumbs are responsible for typing on a normal keyboard. With this Moonlander,I you have a cluster of 3/4 keys just for your thumb. And the best thing you can do is start strengthening and stretching those thumbs to reach all of them. I’m only just now starting to reach multiple keys reliably with my thumb, but I’m excited to use them in chording operations to unlock further layers.

Youf most used keys won’t be the biggest keys on the board. I naively looked at the layout and initially place my most used keys (looking at you, tab) under the biggest keycaps on the board. Those keycaps are big because they’re ultimately hard to reach and away from your four main fingers on each hand. Put quick, frequent keys under your four main fingers and chording keys at the large positions where you’ll be able to hold them down for a long time. (With this keyboard and it’s chording abilities, you will hold down chording keys for much longer.) 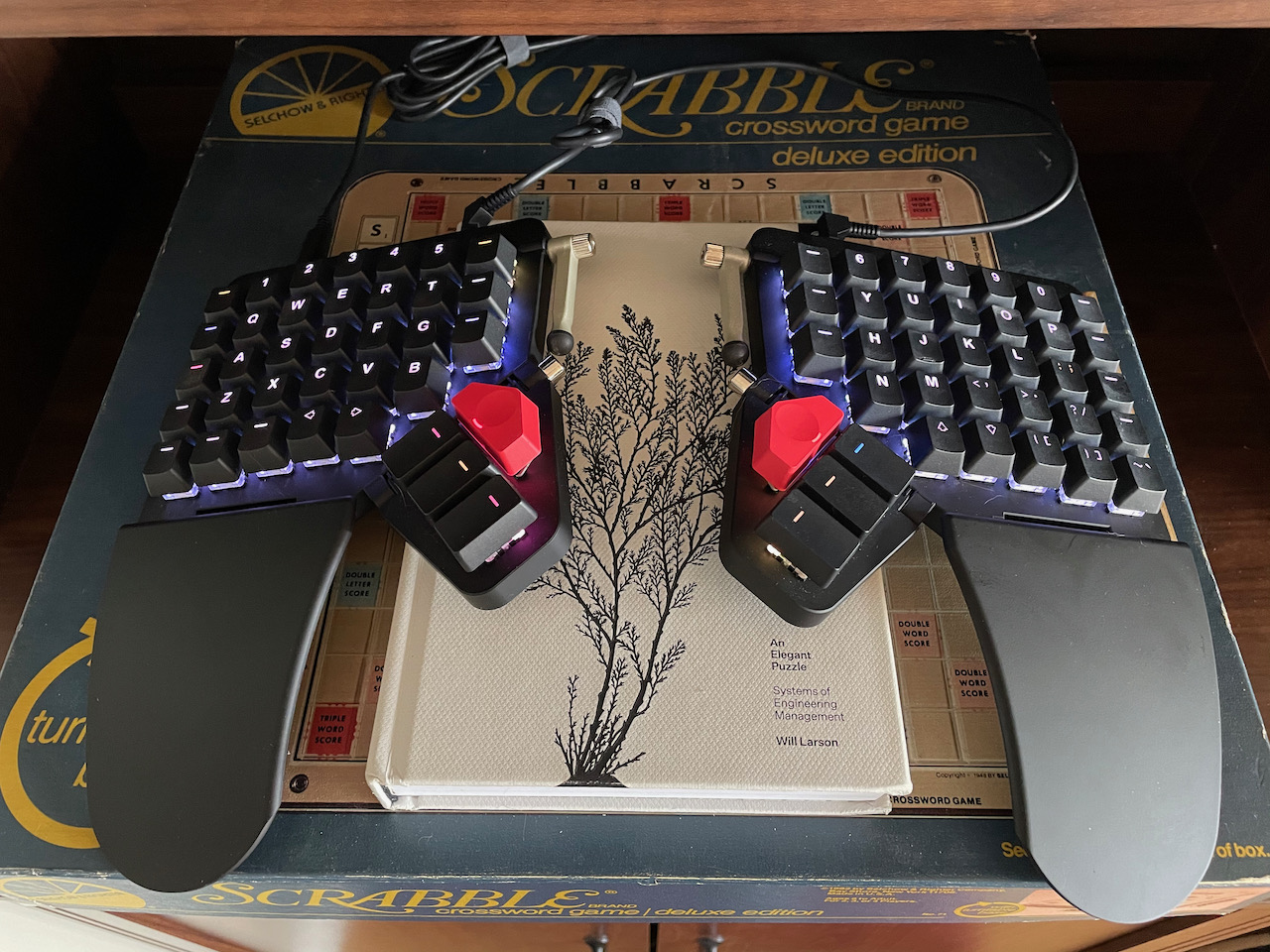 The built-in stands are not ideal for all desks. The board comes with very nice feet for angling the board into a more ‘handshake’ position. Unfortunately, this also requires you to angle the thumb clusters away and inward. When I used this setup, I was completely unable to use a couple thumb keys. Currently, I use a book to prop up both sides of the board, so that all keys remain on the same plane and the thumb keys are much more reachable. In the future, I plan to craft a wooden mount that fits this model.

Tell your coworkers! I spent a good week typing very poorly into work chat logs. I would hit enter too early or forget a letter and worse. I finally posted my excuse - that I was adapting to a new keyboard - and a rush of support fell upon me. Just like a change in residence or new baby, a vastly different keyboard is understandably going to slow you down for a bit and people will understand and smile.

Layers, layers, layer. I only have three layers in my current layout. I’ve seen other layouts with up to six layouts! I feel like this will be the next level of optimization for me, but I’m restricting myself from engaging with more of them until I master my current three.

Currently, I also have 0 (zero!) macros set up under any of my keys (not too much room for them in my paltry three layers!). This will also be a new layer of exploration - I’m hoping to set up macros to switch audio outputs, refactor code, etc. All the things I think of in one second but take 30 seconds to execute.

Want to see (and hear) some typing on this keyboard? Here ya go: